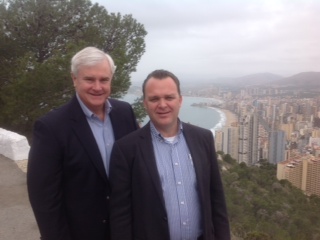 Living, Explaining the Truth of Paul’s Letter to Romans

Recently, it was my privilege to invest two weeks in Spain teaching on Paul’s letter to the Romans.

Ken with Pastor Bruno overlooking Benidorm, Spain. Bruno pastors an evangelical church that has grown from 20 to 100 in the last year and is helping plant several other churches in this beautiful coastal region.

During the week, I was at Sefovan Seminary in Madrid and on weekends at extensions of the school in Benidorm (on the beautiful western coastline) and San Sebastian (in the northern mountains near France). Spain was on the mind of Paul as he wrote this epistle, hoping that the believers in Rome would offer spiritual and financial support as he pursued his longing to preach the Gospel in Spain (Rom. 15:22-24) where the truth about Christ had not been proclaimed.

We spent hours grappling with the powerful truths of this letter regarding both the desperation of sinful people and the abounding grace provided by the sacrificial death of Jesus Christ.

More than 75 faithful pastors, students and ministry leaders were strengthened in their capacity to follow Paul’s passion to present Jesus Christ as the Risen Savior in a nation of great physical beauty and deep spiritual need. They were equipped to live and teach God’s truth in a hostile context with confidence that the message of God’s grace received through faith in Christ is the power of God for people from every ethnic background.

As Paul introduced his letter to the Romans, he declared that this grace was promised in the Hebrew Scriptures and secured by His Son, born of a descendent of David according to the flesh and declared the Son of God by power through the resurrection from the dead (Rom. 1:2-5). The ministry we share with faithful partners like Manny Fernandez (World Link Ministries in Spain and numerous other nations) and the evangelists/church planters who are penetrating scores of cities in Spain is anchored in the reality of the Resurrection. Jesus Christ is alive, seated at God’s right hand in a glorious body like the one we will have for eternity (Phil. 3:21), at work in our lives through the Holy Spirit with the same power that raised Him from the dead (Eph. 1:19).

So…whether in Spain or Fort Worth, your neighborhood or a distant region where the Gospel is largely unknown, we are deployed to live and explain the truths of Paul’s letter to the Romans.

Our message is focused on the Living Savior whose redemptive work on the Cross provides forgiveness and eternal life for all who place their faith in Him.

As you reflect on Romans 1:16-17, make the most of your opportunity as Christ’s ambassador in your unique spheres of influence.